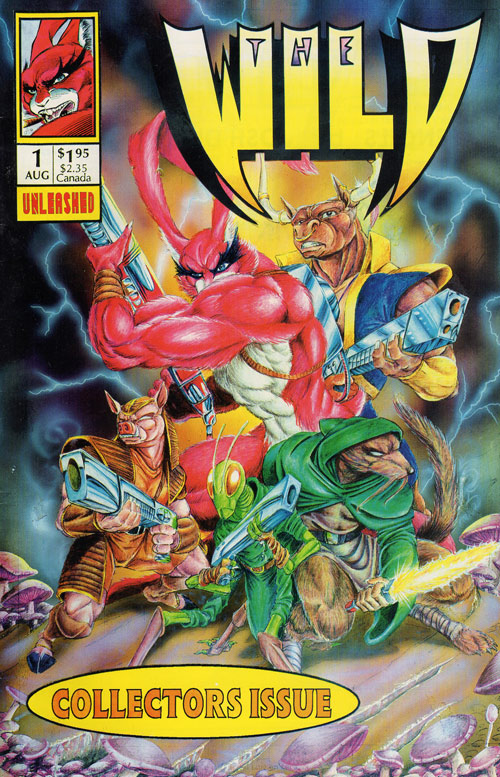 Part three (Read Part 1 here Read Part 2 here) of our interview with Marvel Comics Veteran Mike Witherby. We talk about Marvels Bankrupcy the collapse of the Comic Book Market in the 1990s and the future of comics today.

SM: Working in comics during the 90s had to be crazy. There was a huge booming interest in comic books at the time. The entire industry seemed to be going nuts and then it all collapsed near the end of the decade. What was it like? Did you have any inclination of the impending bust that took place?

MW: At the time it was like there was this great burst of creativity going on it was a real trip and a time of growth for comic books. You had an explosion of independent companies publishing books and a large demand for comic book talent throughout the entire industry. Then in the wake of Marvel’s collapse everything was pretty much destroyed.

SM: Looking back on it what would you say was the main cause of the downfall at the end of the decade?

MW: A lot of greed on the part of the comic book companies. A lot of gimmicks like putting out tons of issue number ones releasing the same comic book with four different covers.  Also there was the technique of making three to four books for every character.  For example you had  Punisher, Punisher War Journal, Punisher War Zone, Spider-Man had like five books and eventually the fans realized they didn’t need to buy all of it.

SM: What was it like after Marvel filed bankruptcy and everything collapsed?

MW: That was a really bad time for me. I had avoided signing any type of contract with anyone because I wanted to play the field. What I hadn’t realized is that Marvel was going to go bankrupt and destroy the entire field. I couldn’t find any work and I had to work as an assistant for people for a while it was a really tough time.

SM: You self-published your own comic book toward the end of the 1990s?

MW: Yes some friends of mine and myself, we were all living in the Coachella valley which is in the Palm Springs area. I had a couple of young artists living near by who wanted to be inkers. So I helped them out and was kind of running a little studio. As they go better I’d let them assist me with some of my work they had an idea to do a comic book so I helped them out and inked about half of it. They had gone through several people who claimed they wanted to publish it but no one ever did.  I had a little bit of royalty money at the time so I published it.

SM: The Wild! I loved the copy you sent to me it’s basically all animals you have stuff in it like  anthropomorphic, muscle pumped, rabbits with machine guns! (The cover to Mike Witherby's self published title The Wild is pictured above left)

MW: Yea a Red Hulka Bunny! It was a lot of fun but it wasn’t successful enough to publish a second issue at the time everyone would buy a first issue of anything and the first issue sold reasonably well but the orders for the second issue didn’t support any type of readership. I’m still very pleased to have published it.

SM: So today you haven’t been in comics for a while and now and you're back doing Strength Monsters?

MW: I’ve had a lot of residual medical problems I’ve had to overcome. Even while working on this project but now my health is starting to clear up. Strength Monster is probably one of the strangest more eccentric projects I’ve worked on so it’s been a lot of fun.

SM: A lot of the nuttiness in Strength Monsters you will find in Pro-Wrestling and in Catch Wrestling.  A lot of the Catch Wrestling old timers that also worked as Pro-Wrestlers seemed  have really crazy eccentric over the top personalities which has had a big influence on my writing. But that’s also the direction my brain tends to write toward. What has been the biggest influence on your work as you’ve been penciling this book? 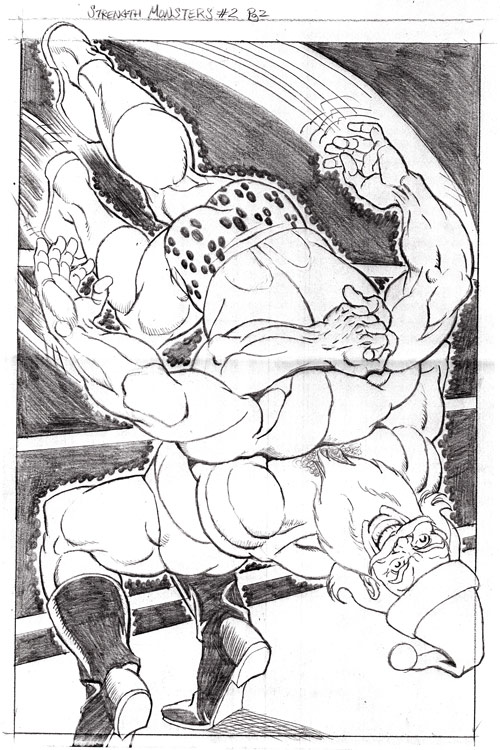 MW: Mostly what inspired me was the reference material you sent me and the book you sent me about Billy Robinson, “Physical Chess.” Reading about how Billy Robinson was a bastion of Catch Wrestling was really cool. I looked at a lot of the photos in that book when I was drawing the pages for this issue. All the materials you’ve sent me on Catch Wrestling have really inspired me. (Pictured left splash page by Mike Witherby for Strength Monsters in "Christmas Tree Delivery")

SM: You were working as an inker when you retired from comics and now you’re back penciling which is what you did when you started working in comics.

MW: Yes I’ve kind of come full circle. It’s been a great experience I had considered my life in comics over and now I’m back.

SM: How has your penciling changed since you started out on Silver Hawks back in the 1980s what's the same and what’s different in your process?

MW: Well everything is pretty much different now. When I was penciling Silverhawks I was working entirely and directly onto the art boards of the actual pages. Now I tend to work in thumbnails and find my shapes there separately and then transfer them onto the board.

SM: How did you come about working that way rather than keeping to doing all of your work directly on the boards.

MW: I found that working full size I tended to freeze up. If I worked in thumbnails I was a lot more relaxed and loose with my pencils. If a drawing didn’t workout I could just toss it out and start over.  Working on the board from the start I’d try to stay more controlled with my penciling so a lot of my figures would come out looking too stiff. I do my thumbnails at exactly half the working size of a comic book page so I’ve found that if you can really make your thumbnails pop the drawing will come across very strong when you transfer them onto the boards.

SM: You’ve done some amazing work on this book. I think we have several really awesome action sequences, great splash pages, and more that really suprasses anything you did back on Silverhawks.

MW: Thank you. I hope so, every artist I think tries their best to constantly see their work improve.

SM: I know you’ve struggled through a lot of health issue over the last few years but it’s been well worth the wait as I believe we have a really nice book coming out. What does the future look like for Mike Witherby?

MW: My health is very much improved this next year I plan to produce some more pencils for another issue of Strength Monsters.