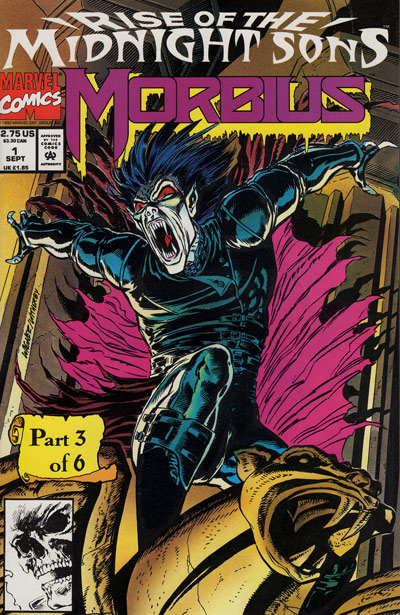 Part two (read part 1 here) of our interview with Marvel Comics veteran and Strength Monsters penciler Mike Witherby. In this installment we talk about Morbius and Punisher War Journal both books Mike worked on specifically we discuss some of the differences betweenthe 1980s Punsiher and the 1990s Punisher.

SM: Morbius is a pretty iconic Silver Age Marvel Character and Ron Wagner is an A+ level penciler what was it like working on that book?

MW: It was a great time I really enjoyed it. Ron did a great job on the pencils which made my job a lot of fun and I just inked my heart out on the book.

SM: You had quite a run on Morbius was there any particular issue you found to be the most challenging?

MW: I think my favorite issue was number three the one with Spider-Man. I grew up reading Spider-Man and always loved the character to get to ink him in a Marvel Comic book was a dream come true. The second issue was definitely the most challenging. Ron had expressed we go a little different direction than what I was use to. The cover to the first issue (pictured left) was kind of my tribute to Joe Sinnott over Steranko. That was the kind of drawing Ron did and in the second issue he said he wanted to go a bit more edgy. He kind of change the look of Morbius and made him a bit more psychotic like a monster or some maniac so I took an entire different direction on inking that cover and the entire book. I did a lot of what I call shredding in the industry they call it splatter.

SM: So that change in style really seemed to push your abilities at the time? 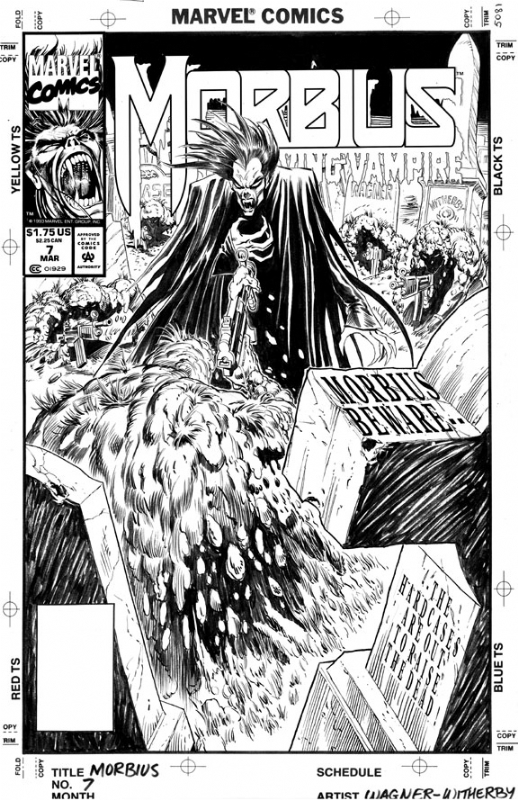 SM: Did you guys run into any editorial problems while working on that book?

MW: Ron did he had some disagreements with the writer with one scene in particular I don’t remember the issue but there was some stuff he did.  Like we did a decapitation scene and someone went in over our artwork and put the head back on the guy. But I really enjoyed working for Marvel and I just wanted to do the best job I cold and not create too much of a ruckus. Ron seemed to battle with them a little bit.

SM: You did some Punisher and Ghost Rider stuff with Ron Wagner also?

MW: I worked on a couple Punisher Books with Ron and we did the Ghost Rider Number Twenty Five Special Edition issue also issues twenty six and twenty seven. If I remember correctly those were done right before Moribus.

SM: I see Ghost Rider twenty six has a Jim Lee, Scott Williams cover with your art inside. It’s a very 1990s looking Jim Lee job but this must of been right in the middle of his rise to comic book fame?

MW: Yea I think that book came out right before the big split with everyone breaking away from Marvel and the formation of Image comics.

MW: The 1990s Punisher is a lot different from the 1980s Punisher. My understanding is they began to base the Character of the 90s on the rogue warrior type of character featured in Dick Marcinko's autobiography about his time in the seals. They seemed to kind of want to base the character on him.


SM: The 1980s Punisher was more or less a crazy guy with a cool t-shirt warring on criminals. In the 1990s they really started to flesh out the character looking into his background as a veteran of war?


MW: The 1980s punisher was a lot more of a daredevil, villain, sort of semi-hero, semi-villain and the character wasn’t as richly defined as they did him in the 90s. In the 80s he’d kind of appear and disappear he really didn’t have the personality of the 90s Punisher incarnation. In the 90s he was a lot more kind of like an urban rat but really over the edge. It was a pleasure to work on the book.

SM: After your run on Morbius ended what did you do?

MW: I was invited by Jim Shooter to work for his new company Defiant which never really made it as a company but I learned a lot working for him. He’s kind of a natural teacher and he really helped refine my work and take it to a whole new level

SM: Jim Shooter is probably best known for having been Editor in Chief of Marvel for a number of years. What kind of stuff did Shooter teach you? When you’d turn in work he’d discuss it with you?

MW: Yea he had me out to New York a few times to visit in the office and he would talk to me about my work then. One of the main things he pointed out to me was a lot of inkers are concerned with line weight which is the thickness of the line and how that relates to where shapes appear in space. Shooter taught me about line importance and how you need to have a natural atmospheric fade in the backgrounds which will push your figures out more. He also helped me with my understanding of storytelling.

SM: I remember Defiant as one of the many independent companies that popped up during the comic book crazy of the 1990s. I believe I even picked up their flagship title, “Warriors of Plasm.”

MW: I worked on Warriors of Plasm it was the strangest concept. The idea that these guys lived on a living flesh and blood planet with a consciousness and could manipulate genes to the point of manipulating life. It was a wild book. Unfortunately Marvel sued Defiant for trademark infringement on the book title. Marvel lost the court battle but the court costs Defiant incurred as a result of defending itself was pretty much the demise of the company.[1]