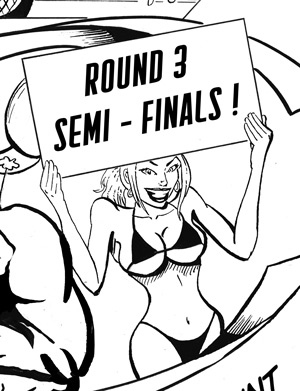 We are proud to report the inaugural issue of our comic book Strength Monster joined the ranks of all great literature and has been banned in elementary schools. Here is the story.

An eight year old little girl whose father had worked on Strength Monsters brought a copy of it to school to show her friends. A teacher saw the comic book and asked to look at it. After viewing the contents inside it was confiscated and not returned. After school with the book still not returned to the child and the parents confronted the teacher to ask why this little girl's property was seized. The teacher replied that the book contained inappropriate material for children.

What is inappropriate about Strength Monsters? The teacher sited this panel in particular stating the position and size of the woman's bikini just barely large enough to cover her nipples is inappropriate.

We asked Strength Monsters creator, inker and writer Sam Kressin if he would be willing to give any statement or comment about the recent ban of his comic book here is what he had to say;


"Yes I am well aware of the size and placement of the woman's bikini in Strength Monsters a comic book I stand by and am still proud of to this day. While I could have made the bathing suit fit her like any normal bathing suit would, I chose not do that because it wouldn't have been funny! Also perhaps if one is actually able to think deeper about things I am making a commentary on Pro-Wrestling Divas and Ring Girls. Furthermore as a parent of three children let it be known to all kindreds, tongues and people of all lands cultures and creeds that I have no issue whatsoever with my own children consuming or viewing any of the materials I have created and that goes for all of my NUDE life drawings as well.”